This event will take place both online and physically in Leiden. All registrees will receive a link to the online platform one day before the start of the event. Please register via the ASCL website. 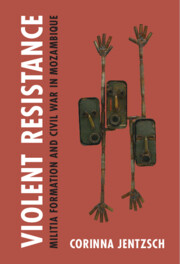 During this country meeting Dr Corinna Jentzsch (Leiden University) will present her new book 'Violent Resistance: Militia Formation and Civil War in Mozambique'. Why do communities form militias to defend themselves against violence during civil war? Using original interviews with former combatants and civilians and archival material from extensive fieldwork in Mozambique, Corinna Jentzsch’s book explains the timing, location and process through which communities form militias. Jentzsch shows that local military stalemates characterised by ongoing violence allow civilians to form militias that fight alongside the government against rebels. Militias spread only to communities in which elites are relatively unified, preventing elites from coopting militias for private gains. Crucially, militias that build on preexisting social conventions are able to resonate with the people and empower them to regain agency over their lives. Jentzsch’s innovative study brings conceptual clarity to the militia phenomenon and helps us understand how wartime civilian agency, violent resistance, and the rise of third actors beyond governments and rebels affect the dynamics of civil war, on the African continent and beyond.

The book launch will feature a short presentation by the author and then comments by three discussants, followed by discussion with the audience.

Corinna Jentzsch is an assistant professor of International Relations at the Institute of Political Science. She studies civil wars and the emergence of informal institutions of security governance. Her current research focuses on community mobilization against insurgent violence, the formation of militias—parties to armed conflict that are neither incumbents nor insurgents—and their impact on civil war dynamics. She is also broadly interested in African politics, transnational aspects of civil wars, and peacekeeping. She has conducted field research in Mozambique, Zambia, and Malawi. Corinna received her PhD from Yale University, and prior to that studied at Free University Berlin and Sciences Po Paris.