It was not until 1878 that the first female students enrolled at Leiden University, but the discussion on whether women were suited to study was by no means over. 8 March is International Women's Day. BBC correspondente Kim Ghattas will deliver a lecture on 6 March on the struggle by Arabic women for equal rights.

Leiden's first female students enrolled in 1873 and disappeared again after a few short weeks. They were two advanced Russian students, from the University of Zürich who wanted to study in Leiden. However, the Leiden gynaecologist Abraham Simon denied them admission to his lectures. In the following years, young women apparently thought twice before enrolling. It was not until five years later, in 1878, that women dared to enrol once again.

While increasing numbers of young women diligently went about their studies, the discussion on whether or not this was something they were suited for was raging above their heads. ‘Science knows no gender,' argued the Leiden Rector Guillaume Daniel Louis Huet in 1885. And this was by no means an exclusively Leiden issue. In 1898 this question was the subject of a national debate. The Utrecht Professor of Psychiatry Cornelis Winkler was of the opinion that marriage and motherhood were a woman’s natural destiny. He met an opponent to his views, and a supporter of women beiing able to study, in the Amsterdam Professor Hector Treub: ‘Yes, women are suited to study, and studies are suited to women.’ Studying would allow women to become more equal partners for their husbands, and unmarried women would be better able to provide for themselves. 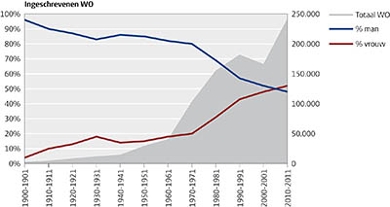 From nervous breakdown to suicide

Around the turn of the century, Leiden Professor of National History Petrus Johannes Blok played a curious role in this debate. He was strongly opposed to the admission of females, and in 1907 wrote an extensive speech for the historical journal Onze Eeuw’ (Our century). His arguments: the female brain is not equipped for study, women are by nature too ‘biased’, and objectivity is a basic requirement in science, so that women run the risk of turning into manly women, and in addition all this studying will cause women to have nervous breakdowns, possibly resulting in suicide.’ Blok was unable to support his arguments with data; he admitted that his argtuments were mostly based on personal observations.

A university specially for women

Blok advocated a women’s university with an adapted curriculum focusing on women. Such a university might prepare women for professions such as teacher, assistant archivist and assistant librarian. Annie Sillevis, a brave student of mathematics and physics, decided to take action against Blok. In 1907 she wrote a pamphlet in which she challenged the generalisations that female students do not take their studies as seriously as do male students, and that they spend less time studying. She also argued that women were new to the university and that they still had to find their way around. In addition: boys were given time to study, while girls were expected to fully participate in the work of the household alongside their studies. ‘Girls are apparently expected to complete examinations without studying for them.’ Sillevis’ printed pamphlet was talked about throughout the Netherlands and it received wide acclaim. 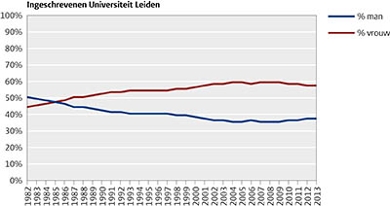 And yet, the resistance against women students persisted. In 1907, the Leiden Rector Jacobus Johannes Hartman agreed with Blok. As did five years later the then Rector Fredrik Pijper. Note that this was 39 years after the Russian students had been so unfortunately dismissed. But maybe this is not altogether surprising. After all, the discussion about women at the university is still ongoing, although it no longer centres on the admission of women students, but on the lagging percentage of women PhD candidates, university lecturers and - especially - professors. 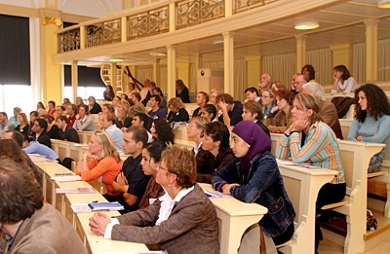 This article is a summary of the article ‘Geschikt voor het verzamelen van stof' (‘Suited for the collection of dust/material’) by historian Agnes van Steen.